Changes in blood sugar in poisoning can be one of the most important determinants of the outcome of patients with poisoning. Since poisoning is one of the most common and increasing causes of death worldwide and one of the most critical medical emergencies, this study aimed to investigate changes in blood sugar in patients with acute poisoning and how patients' blood sugar can predict the severity and outcome of the disease. The present study was performed on 200 patients with acute drug poisoning referred to the emergency department of Amir Al-Momenin Hospital in Zabol from March 2018 to March 2020. Blood glucose levels of all patients were recorded at the time of admission and every hour to the first 5 hours after admission, and the results were entered in the information form of each patient. Finally, the data were entered into SPSS V22 software and statistically analyzed. The mean age of participants was 23.21 ± 12.80 years, and the minimum and maximum age of patients were 1 year and 77 years, respectively, and only 9.8% of them had a history of diabetes. In this study, the highest rate of intoxication with opioids such as methadone and tramadol was (38%), followed by benzodiazepines (20.5%), NSAIDs (19.5%), and SSRIs (7%) were the most commonly used drugs. The prevalence of hypoglycemia in this study was 3% (6 patients), while no cases of hyperglycemia were reported. In this study, most changes in blood sugar were caused by alcohol poisoning. Also, neuroleptics, NSAIDs, and chemicals had the least changes in blood sugar. However, patients' blood sugar at the beginning of poisoning did not affect patients' prognosis. The present study results showed that changes in blood sugar during treatment during drug intoxication, alcohol, medications(sulfonylurea, glibenclamide), and NSAID are very important, so regular monitoring of blood glucose in intoxication with these cases is essential. 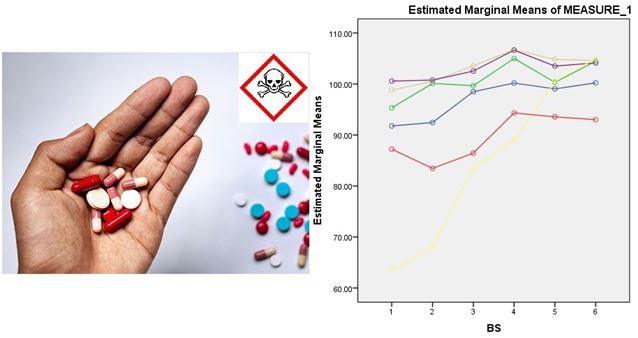 Selected author of this article by journal

This article is licensed under a Creative Commons Attribution 4.0 International License, which permits use, sharing, adaptation, distribution and reproduction in any medium or format, as long as you give appropriate credit to the original author(s) and the source, provide a link to the Creative Commons license, and indicate if changes were made. The images or other third party material in this article are included in the article’s Creative Commons license, unless indicated otherwise in a credit line to the material. If material is not included in the article’s Creative Commons license and your intended use is not permitted by statutory regulation or exceeds the permitted use, you will need to obtain permission directly from the copyright holder. To view a copy of this license, visit: http://creativecommons.org/licenses/by/4.0/

CMBR journal remains neutral with regard to jurisdictional claims in published maps and institutional afflictions.

CMBR Journal welcomes letters to the editor ([email protected]) for the post-publication discussions and corrections which allows debate post publication on its site, through the Letters to Editor. Critical letters can be sent to the journal editor as soon as the article is online. Following points are to be considering before sending the letters (comments) to the editor.

[1] Letters that include statements of statistics, facts, research, or theories should include appropriate references, although more than three are discouraged.
[2] Letters that are personal attacks on an author rather than thoughtful criticism of the author’s ideas will not be considered for publication.
[3] There is no limit to the number of words in a letter.
[4] Letter writers should include a statement at the beginning of the letter stating that it is being submitted either for publication or not.

[5] Anonymous letters will not be considered.
[6] Letter writers must include Name, Email Address, Affiliation, mobile phone number, and Comments

[7] Letters will be answered as soon as possible